When I was a fifteen-year-old junior in high school, my mom, my aunt, and I made a trip to Roberts Wesleyan College for a preview day. They were both RWC alums, and I was casually looking for a Christian school to attend for my undergrad.

As a part of the preview weekend, I attended a chapel service. I was blown away as chapel consisted not of praise songs and a stodgy speaker, but of an American Sign Language performance to music followed by an amazing drama performance by husband and wife duo Acts of Renewal. The team merged teaching, humor, biblical stories, secular themes, and eternal truths into an eclectic, beautiful, and powerful theatrical performance. I was hooked.

Coming to the end of my Roberts career having been active in drama ministry myself, I couldn’t believe my luck when Acts of Renewal appeared on the chapel schedule in the final semester of my senior year. I wasn’t about to let this opportunity slip away. Following the equally inspiring chapel performance, I introduced Josh and myself as the founders of Muse Creative Arts Ministry and told them about the impact they had had on me as a young Christian and artist over five years ago.

That was the moment when Jim Shores and Carol Anderson-Shores became my friends.

It was so surreal that the artists who I had idolized as the embodiment of what Josh’s and my theatrical love could grow into as a couple were sitting down to lunch with me and wanting to hear about my life and accomplishments. Jim and Carol were a total encouragement and inspiration. They offered specific advice for projects Josh and I have volunteered to participate in for ministry purposes, and they expressed general excitement that people with similar passions and talents were coming behind them.

I am so blessed to have met them, and hope that Josh and I will have the joy of knowing them for years to come.

Josh and I returned home late Sunday night from an absolutely wonderful evening with around 80 students from Roberts Wesleyan College and about 2,000 people from the Rochester area. We stepped down from a limo bus with bellies full of desserts and sparkling cider—and with hearts and minds full of a lot to consider.

We were all gathered for a Night to Honor Israel.

This night has caused me to look back on my life and recollect the many moments when God has tugged on my heartstrings to intercede for Israel, and when I—unable to see what the Jewish nation has to do with me—have done nothing.
In elementary school, I gravitated to the stories behind kid-friendly recipes for foods like hamentaschen and challah that I would encounter in Highlights magazines.  I later taught myself the Four Questions of Passover and sang them in Hebrew for a school talent show. In high school the only boy to catch my eye was my future husband whose endearing “Jew-fro” led countless strangers to inquire whether he and I were ethnically Jewish.
As I grew older and my faith and theology began to become my own, my brief interactions with Israel became more serious and thought-provoking. My most beloved professor of a class on the literature of the Inklings admitted to observing all of the major Jewish holidays with her family despite being a Christian with no connection to the Jewish community. Around the same time Josh and I discussed marriage and whether we might like to adopt the same practice with our own children. Nothing ever came of it.
Life went on. Three of our friends studied abroad in Israel. Josh took two years of Hebrew in pursuit of a career in linguistics. We attended a lecture on Yom Kippur solely for the free food—the week of Ahmedinijad’s speech before the UN.

And then Josh forged a business relationship and dear friendship with a young man who, as a Messianic Jew, was active in Christians United For Israel on the Roberts campus.

He invited us to the seventh annual Night to Honor Israel.

I entered the packed sanctuary with the mentality that supporting Israel in some way was probably a good idea just because–who doesn’t want to support the underdog? Israel and the Jewish nation have been persecuted by a different people group in every generation throughout history. Today, the same terrorist organizations threatening the democracy of the United States want to wipe Israel off the face of the earth. I had expected to hear all of that. What I had not expected were the tragic and inspiring individual stories from the beautiful and diverse Jewish men and women praising, encouraging, and defending their Holy Land to an auditorium full of Christians.

These people stood on their faith in the God who has brought them through centuries of tragedy, hoping for the blessed future of their countrymen and of the planet. Their stories brought me to tears and brought prayers for global unity from my mouth. The Hebrew lyrics to the hymn of unification “Hine Ma Tov” rose to my heart’s memory from a distant moment in my childhood, and I danced with the brothers and sisters of the nation of Israel.

As a responsible global citizen, I support Israel as a bastion of freedom, democracy, and the power of obedience to the law in a sea of lawlessness and violence. They are an example of faithful steadfastness to the entire world. As a Christian, I believe the words of Genesis 12:3 “I will bless those who bless you, and whoever curses you I will curse; and all peoples on earth will be blessed through you.”

I believe that God has a plan for this tiny nation that will bring blessings to all the nations of the world.

I don’t know what the future holds for Josh and I and our involvement with defending Israel. All I know is that I want to be a part of God’s plan for these people and, through them, for all people. 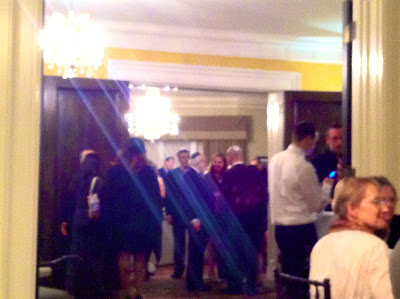 Josh and I had the honor of being a part of Rochester’s seventh annual Night to Honor Israel this past weekend. The event was described as “formal” with “dresses and suits more than welcome.” I was in a floor-length wine-colored gown an hour before leaving when my Mom called to inform me that my sister (ever mortified by my wardrobe) had texted all of her friends who had gone to this event in previous years to confirm that it was “not that kind of formal.”

I’ll be posting more about the event later, but for now I wanted to let you guys have a look at my toned-down version of formal.

Okay, so I’ve been fairly vocal on here about the fact that I’m pretty overwhelmed what with all of my classes, my internship, work, Muse, being married, being a sane person, being an at least somewhat nice person, and the like.

One of these such things is my simply fabulous internship at the local film studio Envision Productions. Paul, my supervisor, has taken me on all sorts of adventures with him, one of which involves filming a documentary about PUSH Physical Theatre. More on them later, but for now, suffice it to say that I am loving my job. Any day that I get to spend watching them work makes my own work seem worthwhile–and not nearly as exhausting as it could be. These guys work up sweat!

However awesome this crew may be, whenever there’s a lot of sweat, there’s a chance for a lot of awkward . . .

I know I’m a drama queen, but I don’t see any point in lying about how I feel on Nine to Phive. Especially when hardly anyone reads this blog since I’ve gotten so lax about updating it. No one will be fooled, if you know what I mean.

Maybe it’s because I now have an IC flareup for two weeks out of the month. Every month.

Maybe it’s because I’m scared to death that I won’t be able to keep a full-time job, let alone a job in the highly impractical field that I love.

Maybe it’s because I’ve had to take a 19-credit load this semester just to graduate on time (barely). Oh, and those extra credits? They cost me $800 of over-enrollment fees.

Maybe it’s because two of Muse’s biggest performances of the semester are over and I don’t feel relieved. No less busy. No less stressed. No less out of breath.

Maybe it’s because, after two and a half years of marriage, I feel like I should have worked out so many of the selfish struggles that my newlywed friends seem to have no problem with after just a few months.

Maybe it’s because I feel guilty turning to my family for support when they’re struggling just as much as me right now.

Maybe it’s because I love God, love my church, and love my brothers and sisters in Christ, but can’t find the time or energy to invest in my personal spiritual life.

Maybe it’s because I want more than anything to write freely–stories, poetry, journals, grocery lists, bucket lists, this blog–and I can’t even find time to do my required writing for class.

Maybe this is my life now.

I thought graduating this spring would feel like a weight being lifted, but as I approach commencement with all of this and more baggage (some of which won’t disappear the moment I walk across that stage), I feel as though it’s just a doorway into different and heavier weights pressing down on me.

Oh, and a drama queen. There’s that, too.

Josh and I are members of the life-changing (albeit controversial) online network known as Couchsurfing. While most people would discourage sleeping on the couches of strangers in foreign cities, Josh and I can’t recommend it enough! That is, if you do it safely . . . i.e., through Couchsurfing.org where members are verified by local community leaders before they can surf or host.

Basically, Couchsurfers get to spend their world travels crashing with locals for free instead of paying for a hotel. In return, you promise that if you are ever able, you will do the same for a traveler passing through your home town. After surfing with fabulous hosts in both London and Stockholm, Josh and I were finally able to make good on our promise to return the favor when a guy named Joel decided to take a bus from Toronto down to the American East Coast.

I accepted his couch request when I thought he was a Canadian . . . Imagine my delight when I realized that we was natively from Sweden, the country where Josh and I left our hearts almost one year ago! Joel stayed with us for two nights. Their was sangria, beef stew, Taco Bell, late-night explorations of Wegmans, some jokes about Swedish and American stereotypes, and a lot of guy-talk about hacking computers and playing RTS games.

Joel was a pure joy as a guest, and we were truly blessed to spend time with him. He reminded me of everything that Josh and I loved about Sweden and everything that we love about Couchsurfing. In his words, “Facebook is for staying connected with old friends, and Couchsurfing is for making new ones.” I compose this post in his honor 🙂

For the record, I love Abba.

Reasons Why We Should All Move to Sweden: